Knowing how a living cell works means knowing how the chemistry inside the cell changes as the functions of the cell change. Protein phosphorylation, for example, controls everything from cell proliferation to differentiation to metabolism to signaling, and even programmed cell death (apoptosis), in cells from bacteria to humans. It’s a chemical process that has long been intensively studied, not least in hopes of treating or eliminating a wide range of diseases. But until now the close-up view – watching phosphorylation work at the molecular level as individual cells change over time – has been impossible without damaging the cells or interfering with the very processes that are being examined.

In this particular study, we were interested in the neuronal differentiation behavior of a line of cultured cells called PC12. When nerve growth factor, a small protein, is introduced into a PC12 cell, the cell begins to send out neurites resembling the projections from nerve cell bodies. Although originally derived from a tumor of the rat’s adrenal gland, PC12 has become, rather counterintuitively, a valuable model of how nerve cells differentiate from their unspecialized progenitors. 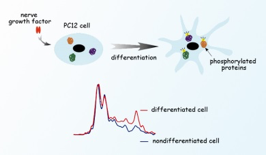 We began the current experiments by introducing nerve growth factor to groups of PC12 cells to induce them to differentiate; one group of cells was left untreated as a control. The cells were cultured on gold-coated slides in chambers maintained at body temperature in a humidified environment and supplied with nutrients. Individual cells of a group were positioned under the infrared beam at the beamline 1.4.3 endstation. FTIR spectra were collected before and after the nerve growth factor was introduced. After stimulation, the spectra were taken first at short intervals, from two to sixty minutes apart. Additional spectra were collected of cells in other groups on the third, fifth, and seventh day of continued stimulation. The first day’s spectra revealed spikes in phosphorylation activity within minutes after the addition of the nerve growth factor, in concert with changes in the ratios of such important chemical contents of the cell as proteins, carbohydrates, and lipids. Phosphorylation subsequently waned, then picked up again in another burst of activity on Day 3, just as the cells began to extend neurites.

It was the first time that we can monitor the differentiation process in groups of cultured PC12 cells in real time, without labeling or any other invasive procedure. This study opens up the possibility of monitoring the real-time biochemistry of living mammalian cells over the long term.