In this application, SR-FTIR spectromicroscopy was used to reveal the temporal functional behavior of the deep sea microbes in the Deepwater Horizon oil spill. To better understand the fate of the oil, Bælum and Jannson enriched and isolated indigenous hydrocarbon-degrading bacteria from deep, uncontaminated waters from the Gulf and exposed them to the oil  and dispersant (COREXIT 9500) used during the spill.

During 20 days of incubation. approximately 60% to 25% of the dissolved oil with or without COREXIT, respectively, was degraded, as were some hydrocarbons in COREXIT itself.  16S rRNA gene sequencing revealed a microbial succession, primarily an increase in abundance of Colwellia and Oceanospirillales during the incubations. 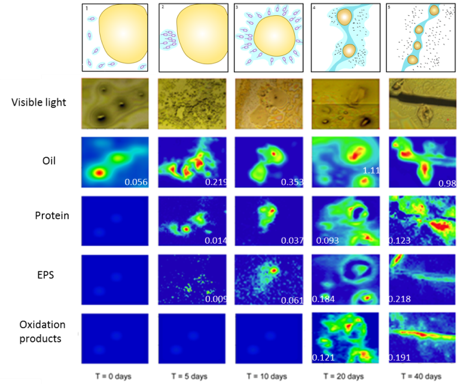 Flocs formed during incubations with oil and/or COREXIT in the absence of FeCl2. Time-lapse synchrotron radiation Fourier transform infrared (SR-FTIR) spectromicroscopy revealed that the flocs, which were comprised of oil, carbohydrates and biomass, evolved over time.

The bacterial community composition in the flocs was determined by 16S rRNA gene 454 pyrotag sequencing. The sequencing data revealed that Colwelliaceae were the dominant taxa in the flocs at relative levels of 70% at all-time points.

Colwellia sp. strain RC25, was isolated from one of the enrichments and confirmed to rapidly degrade large fractions (approximately 75%) of the MC252 oil at 5ºC.

Together these data highlight several features that provide Colwellia with the capacity to degrade oil in cold, deep marine habitats, including aggregation with oil droplets into flocs and substantial hydrocarbon degradation ability.